Alaska Seafood Company’s fish are wild and sustainable. Salmon and halibut swim freely in the Bearing Sea, Gulf of Alaska, Southeast Alaska, and the waters of the North Pacific Ocean. This habitat creates seafood with a lean and firm texture, which provides a superior flavor.

Alaska Seafood Company, incorporated in 1987, is located in Juneau, Alaska.  Our company was formed to take advantage of the new technology of the retort pouch, a “soft can” method of canning. The process allows for a whole smoked salmon fillet or fillet portion to be made shelf stable (no refrigeration required). Since then we have developed an entire line of shelf stable products under the name Alaska Cannery and Smokehouse, which are widely distributed to Gift Shops and “Big Box” retailers throughout Alaska and the North West.

Alaska Seafood Company was the first facility in Alaska to produce smoked salmon in the retort pouch.  Also offered are boneless smoked salmon or non-smoked Wild Alaskan salmon and Halibut which is hand packed in traditional cans. Refrigerated products made available by our company include a line of hot and cold smoked salmon as well as Frozen Fresh Salmon and Halibut portions.

Do you Ship Internationally?

This is how it works:

1.) Place your order through our website and place the International shipping address in the ship to address fields.

2.) Once received your order will be packed and weighed. We will then calculate the International shipping cost based on the final; weight of the package. If there are additional shipping charges that need to be collected, you will be sent an email notifying you of the difference in the shipping cost.

Will My Seafood Arrive Frozen?

In most cases, your seafood will arrive in a completely frozen condition.  Sometimes your seafood may arrive in a partially thawed state due to high temperatures, shipping delays, or small order sizes. This should not be a concern for two reasons. First, the seafood is processed fresh and frozen only 1 time (for shipping purposes) resulting in a quality product that has not been exposed to multiple thawing and refreezing cycles. Second, the seafood portions are individually vacuum packed allowing them to be refrozen with no quality loss.

Seafood that is received cool to the touch can be refrozen without any quality loss.  In the rare occurrence where the seafood is greatly delayed in transit and is no longer cool to the touch, consumers should immediately discard the package. While this almost never happens, please do not file a claim with FedEx directly but contact us immediately.  FedEx requires the customer to provide the invoice and claim information for customer initiated claims.  We are able to expedite the claim process with the carrier and in many cases provide replacement product and shipping before the claim is approved.

We schedule shipments using the following guidelines to ensure the quality and freshness of our products.

What is your wholesale pricing?

What are the nutritional values of your products?

Can I request a greeting card to be sent with my gift?

Yes, please specify your message in the message to recipient box on the check out page.

Will I receive a delivery on Saturday?

Only if requested, call for a rate.

Can I Request Expedited Shipping?

All items can be expedited in shipping by phone request or email. Additional shipping charges may apply. Typical shipping methods are as listed below:

To request expedited shipping please place your order online (or by phone) and follow the order up with an email to shipping@alaskaseafoodcompany.com or call by Phone 1-800-451-1400

To pay the shipping difference for your expedited shipping method please click here.

Must fresh/frozen products be shipped overnight instead of 2-Day service?

To ensure that products are still frozen and in the highest quality upon delivery. They are hand packed into a Thermo-Insulated-Styro, with 1-2 gel ice packs. Then placed into a cardboard over wrap for shipping and protection. Fed-Ex 2-day shipping is available seasonably for orders placed by phone between the months of October and January for customers who desire a reduced shipping cost (product may arrive cool to the touch but not frozen).

How do I store these items after they are opened?

Refrigerate after opening. Should be eaten within 3-4 days.

How long is canned or pouched Salmon good for?

Commercial canned Salmon or pouched products may be safely stored for many years (see below). As long as the container is not damaged, bulged or leaking.

Do you use WILD or farmed fish?

How do I read your expiration dates in the code?

Cans, Jars and Retort pouches are virtually indefinite in shelf life. Anyone eating C-rations from WW II or Korean War era can attest to. We do operate with a guideline for nutritional purposes. Five years for cans and seven years for jars and pouches. After that nutritional will start falling off but they will still fool the tongue and stomach. We use Julian dating to establish when the product was made. See below for cans, this can be read on the can lid.

Date Code for Can Lids 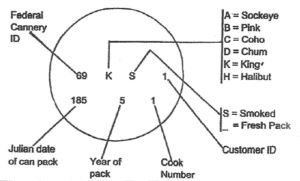 Date Code for Jars and Pouches 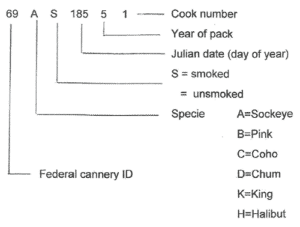 How Do I Become A Wholesale Customer?

Interested in selling our products? Join The Alaska Seafood company. All of our wholesale customers are required to read, fill out, and return by e-mail a 1 page credit application. We currently sell products through a variety of outlets (from small gift shops to big box retailers), for this reason we maintain a low minimum order quantity of 1 case. After reviewing your credit application you will receive a wholesale price list and are free to place your order by phone or using our order sheet available online.